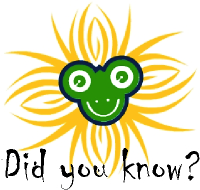 People!
Get off your smartphones
and pay attention
to the traffic signal.
Be prepared for it to turn green
and stomp on the gas!
I don’t want to be honking my horn at you!

I was in La Jolla recently when I saw this sign: 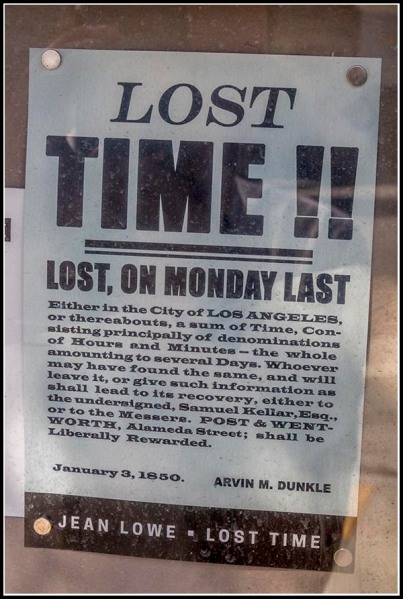 The flyer is dated January 3, 1850, so I didn’t know what to think. Nonetheless, what it said, I found funny, and somewhat true:

Either in the City of LOS ANGELES,
or thereabouts, a sum of Time, Con-
sisting principally of denominations
of Hours and Minutes – the whole
amounting to several Days. Whoever
may have found the same, and will
leave it, or give such information as
shall lead to its recovery, either to
the undersigned, Samuel Keller, Esq.,
or to the Messers. POST & WENT-
WORTH, Alameda Street; shall be
Liberally Rewarded.

When I got home and looked at it more closely, I figured Jean Lowe was an author, her book, “Lost Time,” took place in January 1850, and the main character was Arvin Dunkle.

I went to Wikipedia first. No Jean Lowe. A Google search found her though.

She is an artist, quite an interesting one, too. I found a flyer from two years ago about an art exhibition at the McKenzie Fine Art gallery in New York City featuring her work, titled “Lost Time.” According to the flyer,

….Lowe has created humorous and subversive installations that question intellectual and cultural institutions and societal assumptions. …. Lowe slyly critiques the way society assigns value, and to what, through the creation of a faux auction house showroom. …. From fictional auction houses and websites such as “Roquefort’s,” “Heritage Holdovers,” and “PoliceAuctions.com,“ Lowe’s paintings illustrate items from sales which feature everything from fine watches, love letters, and important old master paintings, to manuscripts and ephemera.

In this exhibition, Lowe playfully transforms the banal into the magical and makes the rarified ridiculous by transforming commonplace items into desirable commodities, all in a satirical setting of high commerce.  Through her painted and sculptured recreations the artist humorously questions what is real, what is true, what has value, and why.

Did you catch the last sentence in the second paragraph? A-ha! Obviously her exhibit “Lost Time” made it to La Jolla sometime recently and that “broadside” was mass-produced to bring attention to it.

I love the arts.

While I was searching for information on Madame Jean Lowe, I discovered that there really is such a thing as lost time.

Lost time is a traffic engineering term for the time during which no vehicles are able to pass through an intersection despite the traffic signal displaying a green (go) signal. The total lost time is the sum of start-up lost time and clearance lost time. Start-up lost time happens when a traffic signal changes from red (stop) to green (go). Some amount of time elapses between the signal changing from red to green and the first queued vehicle moving through the intersection. There is then an additional amount of time for the next vehicle to begin moving and pass through the intersection, and so on. The total time taken for all waiting drivers to react and accelerate is the start-up lost time. Clearance lost time is the time lost to stopping a line of vehicles at the end of a green phase. Lost time is always measured in seconds.

Perhaps a repeat is justified:

People! Get off your smartphones and pay attention to the traffic signal. Be prepared for it to turn green and stomp on the gas so all of us will lose less time! I don’t want to be honking my horn at you!

I got so involved cataloging pictures from the last year and photoshopping some of them that the weekend suddenly has disappeared. Where did it go?

Ah, well, since it’s gone, following are a few flowers that I photoshopped using Topaz Glow, an awesome program if you want to create some really interesting pictures that don’t look like pictures anymore. All of these flowers were growing in one yard. They saw me out their living room window taking pictures and came out to talk to me. 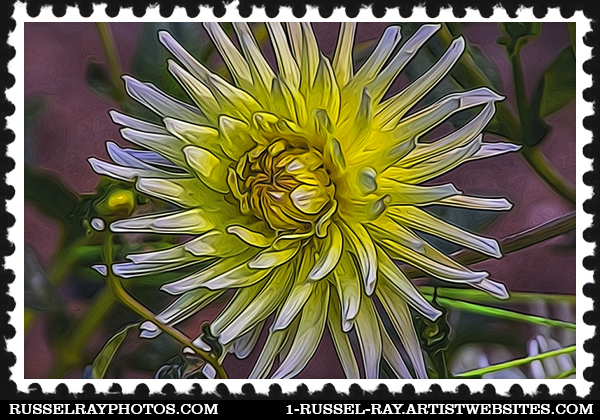 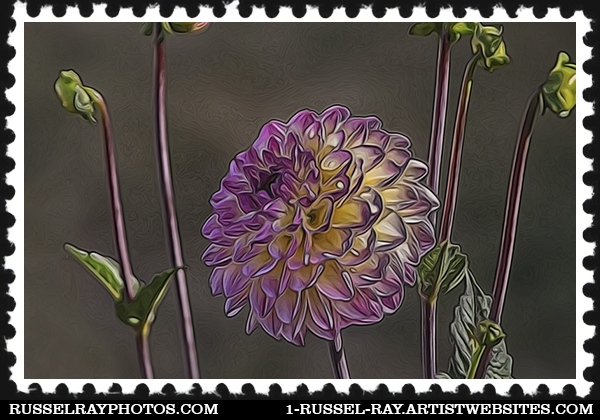 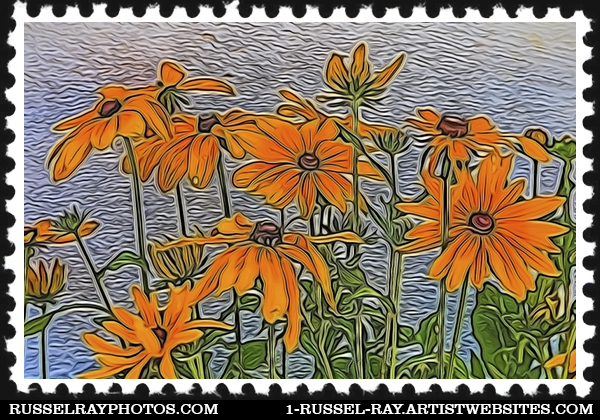 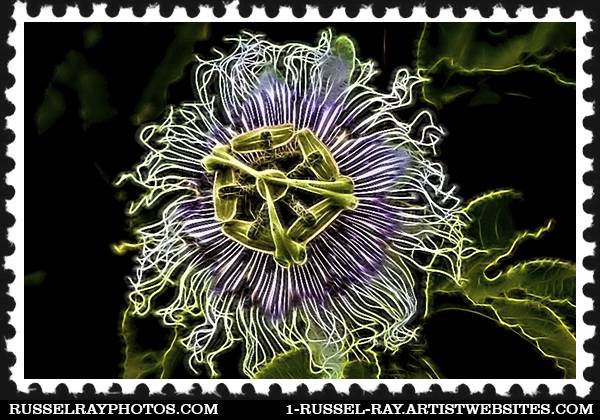 An article at gobankingrates.com really caught my attention on August 29. It was titled “The Most and Least Successful States.” Wow. That’s open to interpretation. Who gets to decide which state is the most successful, the least successful? What criteria? What’s the timeline? Oh, my head was exploding with anticipation of having a few moments to sit down and read the article. Last night I had that opportunity.

Not much in the article surprised me as to the most and least successful states. What did surprise me was the extraordinary amount of data gobankingrates used to come to their conclusions:

The Most Successful States, according to their analysis, are:

In the last three presidential elections—2012, 2008, 2004—the top seven of those states voted for the Democratic candidate. Of the last three in that Top 10, Alaska and North Dakota voted Republican three times, and Virginia voted Democrat twice and Republican once. The article didn’t tell me any of that; my research did. 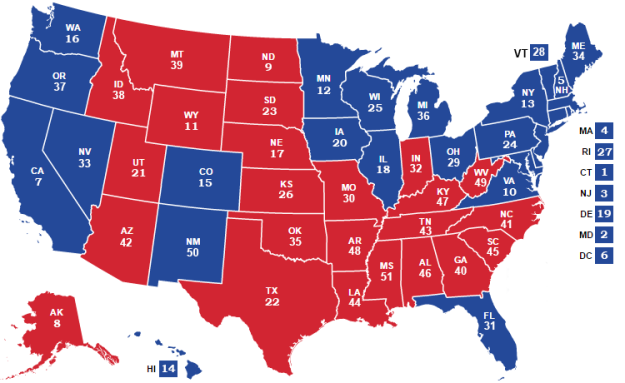 So what gives? Are the religious Republicans not praying for success, for financial well-being? Is that not a goal of theirs? Wouldn’t their greater success and their tithing mean greater success for their churches and religions? I’m just so confused.

As I was pouring over maps and data, I found that the southern states were pretty much blue Democratic states from 1952 to 1976. But there was a change taking place, and it took only one generation for that change to fully occur, starting in 1960 when Alabama and Mississippi voted for a third party candidate.

In 1964, the whole nation except for Arizona and five southern states voted Democratic. Was it a sympathy vote after Kennedy was assassinated?

In 1968, George Wallace, he of Alabama segregation fame (or dishonor, if you will), won the states of Arkansas, Louisiana, Mississippi, Alabama, and Georgia. It should be noted that Wallace considered himself a Conservative Democrat.

In 1972, the whole nation except for Massachusetts voted Republican, and 1976 was the last time that the South voted Democratic. In 1980 the South turned reliably Republican. Only a few states have broken from the Republican fold since 1980, most notably Florida in the 2012 and 2008 elections.

So the generation that came immediately after World War II effectively changed the outlook of the two parties. Look at the following meme of the 1956 Republican Party platform, exactly the opposite of the GOP’s goals the past 20 years or so. 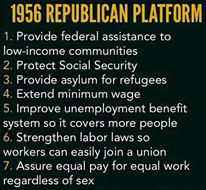 Of course, politics is not a top down event; there is no trickle down politics. Politics start locally.

What I would love to do is see who was in charge of the cities, counties, and states since World War II. That would probably be much more telling than the presidential election. Unfortunately, I have to work and pay my creditors, and doing wonderful research on who has been in charge of America locally since World War II probably is not going to pay my bills.

Hmmmm. Maybe YOU would sponsor me? Or perhaps I could create a GoFundMe account. Or maybe I’ll just wonder and have another margarita.

If you’re interested in the ranking and how the states voted from 2012 all the way back to 1952, I created that list, too:

Most successful states by presidential vote, 1952-2012 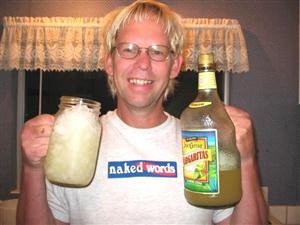