Sad & depressed I am.

Apparently when I started volunteering at Friends of Cats, they thought, “Yeah, another volunteer. Whatever.” Then they discovered that I’m not like other volunteers. I actually like to do things, especially if no one else likes to do them.

Unfortunately, non-profits have paid staff, people who are paid to do things, so when a super volunteer comes along, paid staff get anxious about, perhaps, losing their jobs.

I was doing whatever the various staff asked me to do. First and foremost was laundry, which I kind of enjoyed doing. While washers and dryers were running, I would socialize with the cats. Sometimes I would get asked to help feed, empty trash, pick up and clean empty food dishes, scoop poop, whatever. Always willing to help wherever I could. Someone apparently took issue with my help. I think it’s the only three people who had never asked me to help them with something.

So…. On to my next volunteer adventure.

I have been accepted at San Diego Oasis. I will be helping K-6 students who have been identified as lagging behind their peers in reading. Reading Tutor training is October 16 & 17, and I think actually tutoring the students begins in late October or early November.

I also will be implementing a chess club at one of the Oasis locations, possibly both of them. And I have been approved for teaching a class on “Taking & Making Great Pictures.” Chess and photography won’t start until February 2019, though.

Meanwhile, here’s my last two picture from Friends of Cats:

Remember that if you have a black cat that spends time outdoors, bring the little one in for Halloween night and the several nights leading up to Halloween. There are cruel, mean, nasty people in the world who like to abuse black cats at this time of year. 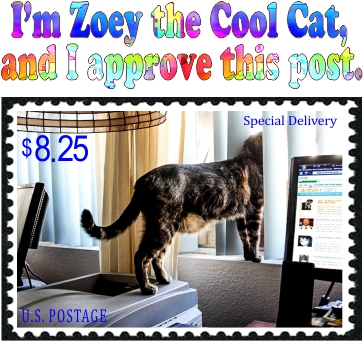