I arrived in San Diego on April 27, 1993. It was to be my last stop on my attempt to find a place to live outside of the Great Nation of Texas. I considered myself retired from all previous professions, so I spent my time visiting all the beaches between Mexico and Los Angeles. Gawd I was having a good time.

One day, while playing beach volleyball with some friends and new acquaintances, someone suggested going skiing. Well, we’re at the beach so what could be more logical than hopping in a boat and going skiing on the great Pacific Ocean. Ha! That’s not what the suggester had in mind. He wanted to go snow skiing. Uh, we’re in San Diego. There’s no snow anywhere for miles around.

I was only partially right. Snow and ski resorts were only 90 miles away. I had been snow skiing several times before so I was game. We headed to Big Bear, California, and spent the rest of the day snow skiing.

Several years later, I saw a picture of downtown San Diego with snow-capped mountains in the background. I thought it had been photoshopped until I saw it for myself a few years later.

I have been trying for 23 years to get my own picture of San Diego with snow-capped mountains in the background. Absent an airplane, helicopter, or hot-air balloon, the only place to get such pictures was Point Loma, about 40 miles due west of the mountains.

For me to get such a picture, not only would it have to snow down to about 1,800 feet above sea level, but it would have to be a beautifully clear day to see all that way through clouds, fog, and smog. Although it snows down to 1,800 feet every five years or so, clear days while the snow exists are few and far between.

When I woke the morning of February 22, 2019, I learned that it had snowed in Alpine, just 7 miles east of where I live, and right at 1,800 feet above sea level. I knew the higher-elevation mountains would be covered in snow, lots of snow.

I can see the mountains from my house, and they had lots of snow on them. It was a beautifully clear day at 7:00 a.m., so I immediately headed to Point Loma. The result of my trip is the three pictures below. 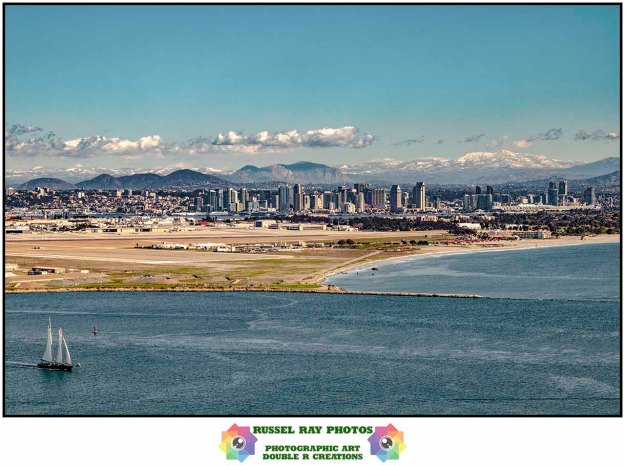 If you ever get to Pine Valley, California, about 40 miles east of downtown San Diego, I can highly recommend stopping at Frosty Burger for the best burgers in San Diego County.

They have no indoor seating; it’s all outside so you can enjoy the San Diego sunshine and the smell of the pine trees.

Sadly, they were closed the day I was there.

I’m not sure why.

It snowed in Julian last night, and since Julian is a mere 30 miles from me, I took a snow morning today to head on out there.

Sadly, I only made it to Cuyamaca Rancho State Park because the road between there and Julian was closed.

Lots of snow action at the Park, though, and my 2017 Toyota Corolla is a snow virgin no more!